Everything You Should Know About EDFA

Optical amplifier is one of the greatest inventions in fiber optic communication, which greatly increase the capacity of optical fiber communication. This paper will give an introduction to optical amplifiers, including how they work, and the typical types. And the paper features highlights on the EDFA amplifier, including its structure, operating principle, advantages, and application combined with WDM technology.

What Is an Optical Amplifier?

The typical types of optical amplifiers include three types as follows.

What Is an EDFA? 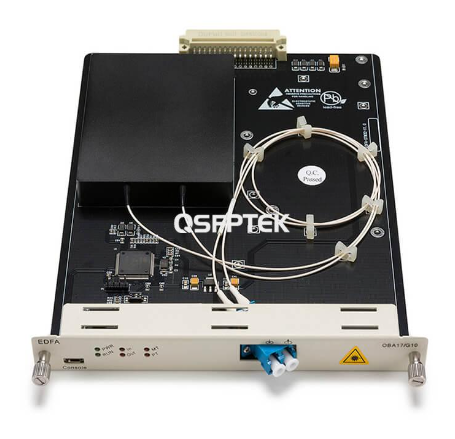 The following figure shows the basic structure of EDFA.

A typical EDFA amplifier mainly consists of the following components:

• Erbium-Doped Fiber: Core of the EDFA. It is made by doping the rare earth element Erbium into quartz optical fiber.

• Isolator: Used to restrain the optical lights from reflecting and ensure the optical amplifier works stably.

• Optical Filter: Narrow band-passed optical filter with bandwidth within 1nm. Used to eliminate the spontaneous emission light of the EDFA amplifier to reduce the EDFA noise.

How the EDFA Fiber Amplifier Works

An EDFA is mainly composed of the Erbium-doped fiber (10~30 meters) and the pumping laser (980nm or 1480nm wavelength). After being stimulated by the pumping laser, the Erbium-doped fiber comes into a metastable high excited state and generates stimulated emission, so as to amplify the input optical signals. Generally, an EDFA can get 15-40dB gain, and the relay distance can extend more than 100km.

Questions About EDFA You May Concern

1. Why Er-doped fiber amplifier is most widely used? Which rare-earth ions can also be used in the optical amplifier except for Erbium?

The working wavelength of EDFA is exactly the minimum-loss window of optical communication, which is one of the reasons why EDFA is most widely used.

EDFA amplifier is the most widely used optical amplifier, which has many advantages as follows:

• Works at the minimum-loss window of optical communication. EDFA works at 1550nm wavelength, which is exactly consistent with the minimum attenuation window of the single-mode fiber.

• High coupling efficiency. The coupling loss of EDFA and transmission fiber is very low, even lower than 0.1dB.

• High output power: Bidirectional pumping can reach up to 20dBm.

• High stability. The gain of EDFA is insensitive to temperature and polarization independence.

Since the EDFA amplifier has many advantages as mentioned above, it has been widely used in many applications as follows:

In recent years, the combination of WDM ((Wavelength Division Multiplexing)) technology and EDFA amplifier has become the mainstream in high-speed and large-capacity optical fiber communication systems. From the general WDM system structure below, we can see that the wavelengths transmitted in the optical fiber increased many times with the combination of WDM technology and the optical amplifier.

EDFA fiber amplifier used in the WDM system is mainly to compensate for the fiber transmission loss. EDFA amplifiers can be divided into three types according to different locations and functions in the WDM systems:

1. Booster-Amplifier. Located behind the multiplexer, is used to increase the power of multiple wavelength signals after multiplexing. High output power is required.

2. Line-Amplifier: Located behind the booster amplifier, is used to periodically compensate for the transmission loss. A low noise index and high output power are required.

3. Pre-Amplifier: Located before the demultiplexer and behind the line amplifier, is used to amplify signals and increase the receiving sensitivity of the receiver. A very small noise index is required.