Everything You Should Know About QSFP-DD Optical Module

The QSFP-DD is the smallest 400G form factor optical module on the market today. It is also the optical module that offers the highest transmission bandwidth density in 400G applications, with backward compatibility to previous generations of QSFP form factor modules, making it widely popular in many data center and enterprise applications. This article will provide a detailed comparison of the current mainstream 400G optical modules, including QSFP-DD, QSFP56, OSFP, CFP8, COBO, and other modules. By reading this post, you will know the difference between these 400G optical modules.

What is a 400G QSFP-DD Optical Module?

The following section will list the benefits of the QSFP-DD form factor:

The following sections will describe the differences between various QSFP form factors, including QSFP-DD, QSFP+, QSFP28, and QSFP56.

As different QSFP form factors, QSFP-DD, QSFP+, QSFP28, and QSFP56 have the same width, length, and thickness. This means they are identical in appearance. In terms of internal transmission channel design, QSFP+, QSFP28, and QSFP56 are 4-channel electrical interfaces, while 400G QSFP-DD optical modules are 8-lane electrical interface, and it also provides doubles the number of ASIC ports to support existing interfaces such as CAUI-4. Due to the need to accommodate an extra row of contacts, the mechanical interface of the QSFP-DD on the host board is slightly deeper than other QSFP system transceivers.

The QSFP-DD module provides maximum bandwidth 400Gbps, whereas the QSFP+/QSFP28/QSFP56 can only achieve 40Gbps/100Gbps/200Gbps respectively so the QSFP-DD connectors are applied to 400G optical modules, DACs and AOCs for 400G data center interconnects and enterprise application. While QSFP+/QSFP28/QSFP56 modules and DAC/AOC are utilized for interconnecting 40G/100G/200G networks.

As we mentioned earlier, the QSFP-DD standard is backward compatible with both transceiver modules of the previous generation of QSFP systems because it also uses the QSFP form factor. QSFP-DD technology increases the bandwidth and maximum transmission rate of the module based on the appearance of the QSFP system. The feature of backward compatibility allows QSFP-DD modules to avoid large-scale replacement of existing equipment during installation, thereby achieving the purpose of reducing the cost of network upgrades.

The following table shows the difference between QSFP-DD/QSFP56/QSFP28/QSFP+:

The following section will talk about the differences between common mainstream 400G optical modules.

OSFP stands for Octal Small Format Pluggable, a new pluggable module that is designed with eight high-speed electrical channels and can reach up to 400Gb/s (8x50G) or 800Gb/s. The difference between these two modules lies in their different dimensions. The QSFP-DD module has a shape of 18.35mm*89.4mm*8.5mm, while the OSFP module has a shape of 22.58mm*107.8mm*13mm. Although their shape dimensions are different, they have the same transmission density. The OSFP transceiver has a transmission density of 36 OSFP ports per 1U, achieving a transmission density of 14.4Tb/s per 1U. 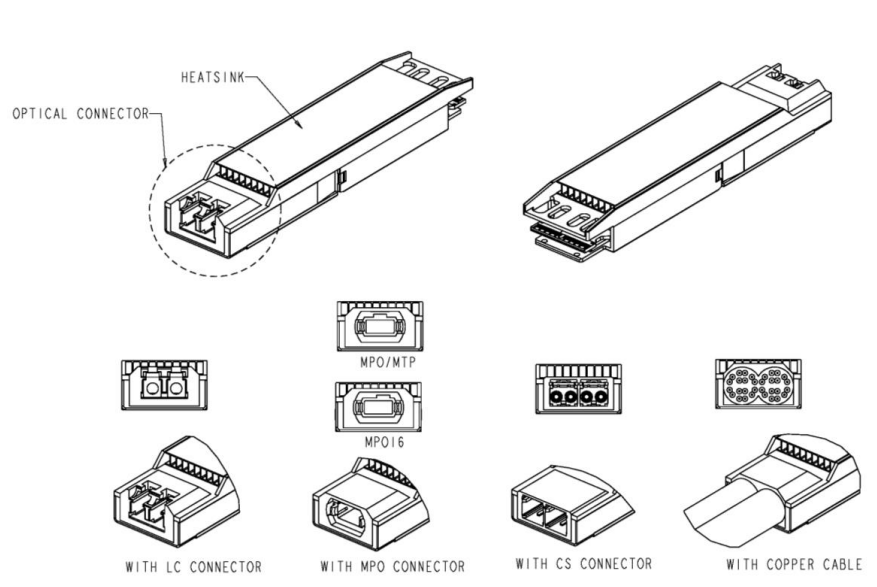 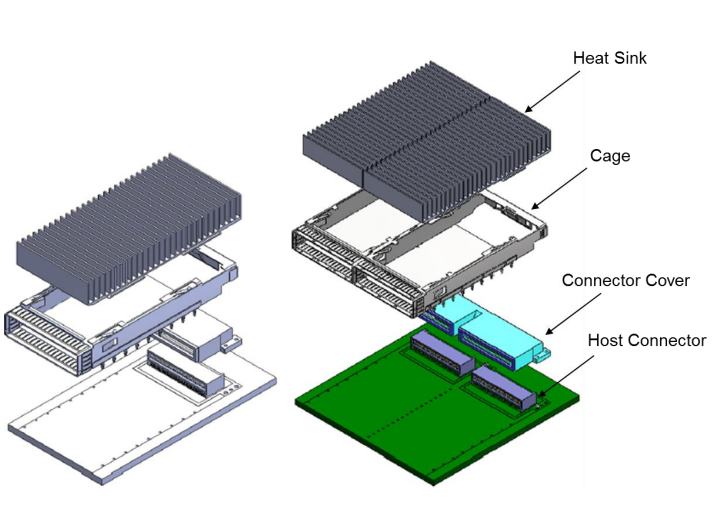 Compared to the previous modules, the COBO (Consortium for On-Board Optics) module is the most special because this module is installed inside the line card equipment in a controlled environment, which means it does not have the hot-pluggable capability and lacks flexibility in use and installation. So in terms of maintenance difficulty, the COBO module is more complex, brings a lot of inconvenience to operations. In terms of electrical interface design, COBO has two specifications, one for eight channels and the other for sixteen channels, which can reach the maximum transmission rate of up to 1x400G and 2x400G respectively. 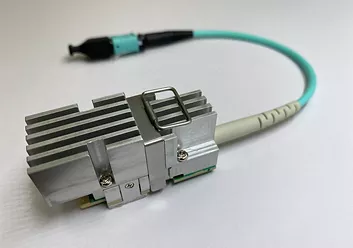 In summary, we can clearly see the different differences between these four modules, and the QSFP-DD and OSFP modules also get higher ratings. These two transceivers are more popular among fiber optic manufacturers than the other two, while QSFP-DD is generally suitable for data center and enterprise applications, while OSFP modules are generally suitable for telecom industry applications.

Conclusion: Will QSFP-DD Still Popular In 800G Ethernet In The Future?

Many people wonder whether QSFP-DD can continue to be popular in 800G Ethernet, so that it can be used with confidence to prevent large-scale equipment replacement in the future. Currently, the market for 400G Ethernet is slowly expanding as data centers demand more and more network bandwidth, and QSFP-DD modules are widely used in 400G Ethernet due to their numerous benefits. For the development prospect, the single-wave 100G technology is becoming more and more mature when 400G Ethernet is commercially available on a large scale, which lays the foundation for the 800G transmission rate‘s release.

And the QSFP-DD800 Multi-Source Agreement (MSA) organization has released the first version of the hardware specification for the QSFP-DD800 transceiver. This specification intends to continue using the QSFP-DD form factor to support single-channel transmission rates up to 100Gbps, which means that this form factor will continue to be used in the future, and it will remain popular for 800G Ethernet in the future. If you want to know more information about the 400G optical module transceiver, please contact QSFPTEK via sales@qsfptek.com.