What is BiDi SFP, how it works, what fiber it should operate with, what is the application, what are the differences between BiDi SFP and common SFP, these questions will be answered one by one in this post.

What is BiDi SFP?

BiDi SFP means bidirectional small form-factor pluggable transceiver. The most distinct characteristic of the bidirectional SFP transceiver is that it is able to achieve bidirectional fiber optic communication by operating on a single fiber. Based on WDM (Wavelength-Division Multiplexing) technology, BiDi optics are able to split different wavelengths of light paths through an integrated wavelength-division multiplexing splitter of BiDi SFP transceivers. The following is a Cisco BiDi SFP provided by QSFPTEK. 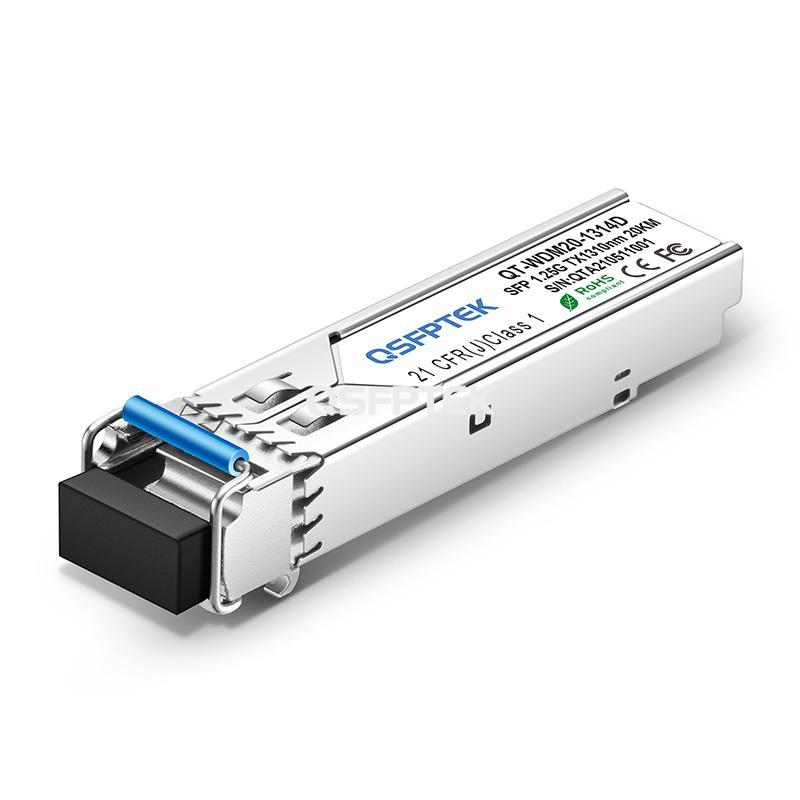 How Does BiDi SFP Work?

As the above-mentioned introduction about BiDi SFP, we have learned the modules separate different transmission wavelengths over a single fiber to achieve optical communication. To elaborate, the single-fiber bidirectional SFP transceivers must be used in pairs, as depicted in figure 2. At one side a 1000BASE-BX10-U (Tx1310nm/Rx1490nm) BiDi SFP transceiver transmit a 1310nm wavelength optical signal and receive a 1490nm optical signal while the opposite side of the single-fiber bidirectional link 1000BASE-BX10-D (Tx1490nm/Rx1310nm) BiDi SFP transmit a wavelength of 1490nm and receive a 1310nm optical signal conversely. The integrated optical component of WDM couplers plays a critical role in bidirectional fiber optic communication.

Different from the common SFP transceivers, which are typically designed with two ports, one for transmitting signals and the other one for receiving signals, BiDi SFP has only one port for both transmitting and receiving based on WDM technology. Consequently, BiDi SFP uses only one single fiber while the common SFP optical transceivers need duplex fiber to achieve fiber optic communication.

Generally, BiDi SFP is designed to support link lengths of 10km to 120km. For fiber optic cable, the signal is transmitted as a light impulse in the fiber and bounces off the fiber cladding. Signals will be partly lost during the bouncing process. The smaller core is able to minimize this bouncing signal loss and allows a longer transmission distance, so single-mode fiber is typically used in BiDi optics links for its smaller diameter core of 9um compared with 50um of multimode fiber (OM2).

However, whether the existing multimode fiber used in the short-range distance connections can be used to connect BiDi transceivers? The answer is yes. QSFPTEK lab has carried out a few tests to confirm it by using a pair of 1310nm/1550nm BiDi SFP transceivers. The testing result shows they operated well within 320m transmission distance via multimode OM2 cable but ended up with bit failure rates in the longer distance. Consequently, BiDi SFP can be used in multimode fiber connections, but it is suggested that the transmission distance should be no more than 300 meters.

Related products used in the above singer-fiber BiDi connectivity

Why Do We Need BiDi SFP - Applications

BiDi SFP optics allow bidirectional fiber optic communication over a single fiber, thus a number of fiber resources and cabling construction costs are saved to a great extent. They have been widely used in PTN (Packet Transport Network) network deployment. The application of the transceiver can be concluded as follows.

Network Link Capacity Expanding - When network operators build transmission networks, the scale of optical cables is deployed according to a certain business volume and fiber core ratio. However, with the continuously increasing number of users in recent years, there is a gradual shortage of optical cable core resources. If reconstructing new optical fibers, it will take a long construction cycle and enormous costs. Then this problem can be effectively solved by using the single fiber BiDi transceivers, realizing the rapid improvement of the capacity of network links and saving the cost of network construction in the meantime.

What are the Differences Between BiDi SFP and Common SFP

After the previous elaborate introduction about bidirectional meaning, how BiDi optics work, BiDi fiber, and applications, the differences between BiDi SFP optics and Common dual-fiber SFP optics can be concluded as follows.

Outline Appearance - Single-fiber BiDi SFP connector has only one port whereas common SFP has two ports.